The Physics Club is the perfect club for all physics enthusiasts to expand their knowledge and passion for physics.  Club President David Caron ‘16 says, “I got involved in the Physics Club because of my relationship with the department. The students and faculty created such a great atmosphere that I wanted to contribute.” Vice President Matt Holsten ‘16 explains how the club attracts all people interested in physics as a way to get involved with the department.  “I was an engineering major previously, and when I joined the Physics Club I was able to strengthen the friendships I had in the department, meet new people, and form relationships with professors outside the classroom.” 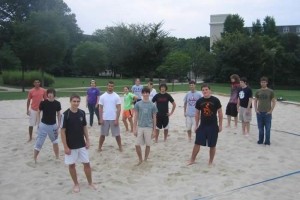 Joining the Physics Club as a first-year student or a transfer has many benefits.  “First-year students should join our club because we provide great resources for them,” says Caron.  “Even if they are not a physics major, we are friendly and do fun activities on and off campus.” The club takes suggestions from all its members on social events as well as topics on projects and demonstrations. “We have group projects that run for the course of the semester that show some of the applications of physics such a demonstration using a bed of nails or building a hovercraft,” says Ian Reed, Physics Club member.

The Physics Club plans social events that would be fun for non-majors to attend. They planned a Star Party in collaboration with the Astronomy Club and invited students from all across campus to look at the stars through telescopes set up in front of Green Hall.  Next semester, the club is hosting a screening of Cosmos with Neil Degrasse Tyson on a large projector screen. “Cosmos is a reboot of a Carl Sagan TV special and is designed to explain cool astrophysics to non-science people,” says Caron. 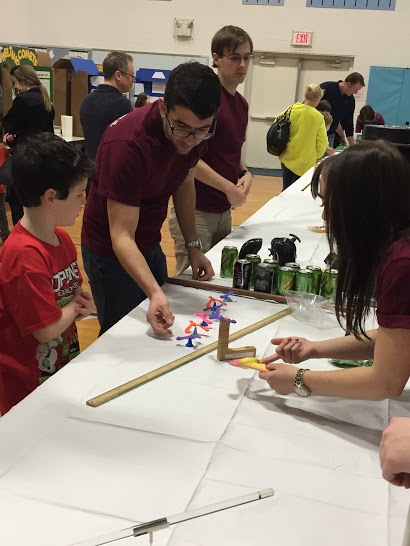 In addition, the members take an interest in community outreach.  “Last spring semester we volunteered in several science fairs in the Ewing/Hopewell public schools and set up our own table with physics demos for the kids. We let the students play with the demos to show them that science is something you can have a lot of fun with. We also judged the student experiments for one of the fairs,” says Holsten. “I really believe that these are the best events that we could do as a club.  Community outreach and acting as role models for younger students who are interested in science is invaluable.”

While members of the club have varied fields of interest within physics, many of them are enthusiastic about studying astroplasma, a branch of space science. “We plan on getting a private tour at the Princeton Plasma Physics Lab, which is a U.S. Department of Energy facility that conducts research in plasma physics and nuclear fusion,” noted Holsten. The field trips allow students to gain insight on current topics and interests for future careers.  Physics Club Secretary Kristen Miner adds, “We’ll get to see the facilities as well as get some insight on what’s up-and-coming in our field.  I am specializing in biophysics, but I hope to work in a plasma physics lab next semester as I am very interested in that subject as well.” While the club is open to all majors on campus, most of its members are Physics majors.

The Physics Department is a close-knit community with many opportunities for networking, undergraduate research, and collaboration with faculty. “I think some of the biggest opportunities stem from making connections with other students and professors within the department,” says Holsten. Miner adds, “The classes have made me love studying physics more than I thought I ever would. Also, the professors are all extremely passionate and knowledgeable about their respective fields of study, and this has inspired me to pursue my interests.” Miner also feels that opportunities within the club and the department have been equal for both genders. “There’s always such a stigma that science is a man’s world. I feel like it’s important for women to realize that they are just as intelligent and qualified to follow their dreams as men are. Science, especially physics, is always changing, and it’s just as important for women to be involved in it as it is for men.”

Speaking with active members and participants of the Physics Club shows how getting involved in the club not only prepares you for shaping your interests in physics but also opportunities to reach out to other physics enthusiasts regardless of major. The club demonstrates the passion and intellectual atmosphere that the Physics Department offers for all students – from the exciting undergraduate research opportunities and networking opportunities with faculty to interesting demonstrations and fun social events.

Holsten sums it up perfectly. “The club and the department really proved to me that I was in the right place.”