Registration for the Spring 2020 semester begins on Tuesday, November 5th, and ends on Friday, November 15th.  Please see the below link for more information about registering for Physics courses. 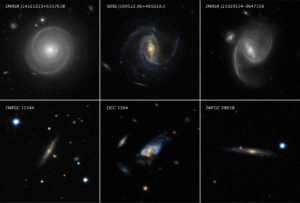 One of the Physics department’s newest professors, Dr. Lauranne Lanz, has recently co-authored a paper on massive spiral galaxies with Patrick Ogle of the Space Telescope Science Institute in Baltimore, Maryland. This paper was published October 10, 2019 in the Astrophysical Journal Letters, and presents new data on the rotation rates of super spirals collected with the Southern African Large Telescope (SALT), the largest single optical telescope in the southern hemisphere. Additional data were obtained using the 5-meter Hale telescope of the Palomar Observatory, operated by the California Institute of Technology. Data from NASA’s Wide-field Infrared Survey Explorer (WISE) mission was crucial for measuring the galaxy masses in stars and star formation rates.

Referring to the new study, Tom Jarrett of the University of Cape Town, South Africa says, “This work beautifully illustrates the powerful synergy between optical and infrared observations of galaxies, revealing stellar motions with SDSS and SALT spectroscopy, and other stellar properties — notably the stellar mass or ‘backbone’ of the host galaxies — through the WISE mid-infrared imaging.”

Links to the official press release for this paper can be found below:

TCNJ’s Physics Department has been awarded a $245,000 grant from the National Science Foundation’s (NSF) Major Research Instrumentation program. The funding will bring a new piece of research equipment called a spatial light modulator system to the College.

At TCNJ, this new system will be used to enable research and training in interdisciplinary fields including optical materials, bioscience, and human-computer interaction. It will benefit the research programs of 10 faculty members across five different departments, as well as their more than 60 undergraduate research students. The spatial light modulator will allow researchers in materials science to probe light-responsive materials that act as molecular motors. It will be able to selectively illuminate neurons to study their connectivity. Computer scientists will use the equipment to construct augmented reality systems that allow them to develop visual interfaces between computers and their users.

In addition to its usefulness in research, the spatial light modulator will also be used at TCNJ to improve undergraduate STEM education and training. The system will be used in the education of future high school science teachers and in the development of new undergraduate instructional physics laboratories that reflect current technology. Both TCNJ’s NSF-funded Robert Noyce physics teacher training program and the College’s Integrative STEM Education program will benefit from the new instrumentation.

This project is a collaborative effort supporting faculty members and students spanning four of the School of Science’s academic departments and one department in the School of Engineering. The project is led by Dr. David McGee (Physics), who serves as Principal Investigator on the grant, and Co-PI Dr. Tuan Nguyen (Physics). In addition to Drs. McGee and Nguyen, the grant includes 8 other faculty members: Dr. Heba Abourahma (Chemistry), Dr, Sharif Mohammad Shahnewaz Ferdous (Computer Science), Dr. Nathan Magee (Physics), Dr. Stephen O’Brien (Integrative STEM Education and Electrical Engineering), Dr. Romulo Ochoa (Physics), Dr. Andrea Salgian (Computer Science), Dr. Zaara Sarwar (Biology), and Dr. Sejong Yoon (Computer Science). The new equipment acquired through the grant will support the research of these 10 teacher-scholars and the over 60 undergraduate researchers who work with them each year.

TCNJ again was named to the Physics Teacher Education Coalition’s “5+ Club,” a select group of institutions that have graduated five or more physics teachers in a given year.

TCNJ has been named to PhysTEC’s “5+ Club” for three of the past five years. Most colleges and universities graduate fewer than two trained physics teachers a year, and the most common number of graduates is zero, according to PhysTEC, a flagship education program of the American Physical Society and the American Association of Physics Teachers.

“TCNJ’s Physics Department has a deep commitment to excellence and has distinguished itself as one of the leading undergraduate Physics programs in the United States,” says Jeffrey Osborn, Dean of TCNJ’s School of Science. “Whereas Physics programs across the country have struggled, TCNJ Physics has been purposeful in designing an academic experience that deeply engages all of our students in the field and prepares them exceptionally well for an array of career paths.”

One of the ways TCNJ is able to do this is through a grant from the National Science Foundation that helps fund full tuition scholarship opportunities for juniors and seniors pursuing physics teacher certification through its Robert Noyce Physics Teacher Education Scholarship Program. Seven scholarships are awarded each year to recipients who commit to teach in a high-need school for two years after graduation.

“The department’s focus on the importance of role models and advocates for students at all levels of the education pipeline has allowed them to strategically build a program that inspires and supports the next generation of high school physics teachers,” says Osborn.

In its 2014 report, the American Association for Employment in Education found that the teacher shortage in physics is No. 1 among 59 education fields. Of the approximately 1,400 new teachers who are hired to teach physics each year, only 35 percent have a degree in physics or physics education.

Other institutions recognized by the PhysTEC 5+ Club for the 2017–18 academic year are:

TCNJ’s Physics Department is recognized annually by the American Institute of Physics as one of the top producers of physics majors in the United States. The most recent report of the American Institute of Physics ranks TCNJ’s Physics Department in the top 2 percent nationally for physics graduates among 496 non-PhD granting institutions in the U.S., and in the top 8 percent nationally among all 751 PhD and non-PhD granting institutions in U.S.  Moreover, TCNJ’s Physics Department ranks among the top in the nation in the percentage of its graduates who have gone on to complete doctoral degrees, according to the National Science Foundation.

Teacher education represents an important part of the TCNJ Physics Department’s mission as well, and TCNJ is consistently among the national leaders in number of new physics teachers certified to teach at the secondary level. In fact, TCNJ Physics ranks among the top institutions nationally by number of physics teacher certifications among all U.S. college and university physics departments.

The Physics Department has also been working to improve diversity and inclusion within the field of physics.  In particular, TCNJ’s Physics Department was selected by the American Physical Society to host the 2019 Conference for Undergraduate Women in Physics (CUWiP) for the Mid-Atlantic States. Over 300 attendees participated in the three-day conference, including undergraduate physics majors, professional physicists from industry and higher education, corporate and academic leaders, as well as high school students and teachers.

The Physics Department has also been recognized widely at TCNJ, including with the 2018 TCNJ Mildred Dahne Award.  This award is presented annually by the Faculty Senate and recognizes departmental or program excellence.

The Department of Physics has won the 2018 TCNJ Mildred Dahne Award. This award is presented annually by the Faculty Senate and recognizes departmental or program excellence.

Applications must demonstrate excellence and outstanding achievement in three of the six categories:

All applications must address the first category, “Excellence in teaching and/or support of teaching.” Departments or programs may then select two additional categories for consideration. 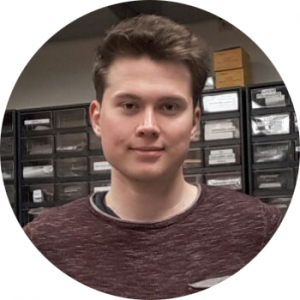 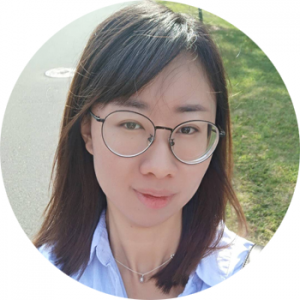 The TCNJ physics department was recently recognized by the Physics Teacher Education Coalition (PhysTec) as a member of the 5+ Club, for having graduated 9 physics teachers in 2016. Only Rutgers University graduated more (10) nationally. PhysTec is co-sponsored by the American Institute of Physics, The American Physical Society, and the National Science Foundation.

Students and faculty meet on Tuesday and Thursday afternoons to discuss physics and enjoy tea and cookies. Below are pictures from one of our recent gatherings: